SARASOTA – It’s safe to say no one really wants to have surgery or deal with the recovery that comes with it, but platelet rich plasma therapy may help avoid that.

Jason Richards is very active and has the arthritis to prove it, but when the pain got in the way of his sleep and daily routine, Dr. Daniel Kassicieh recommended PRP.

“Platelet rich plasma therapy is a natural way to get healing of a torn meniscus or a torn rotator cuff,” says Kassicieh. By injecting two ounces of the patients’ blood into the injured joint, PRP heals the muscle without anesthesia or the chance of infection.

“The PRP actually regenerates new stronger, healthier tissue, so it repairs the tear in the rotator cuff or torn meniscus, it glues it back together all by natural mechanisms,” says Kassicieh.

Richards gave it a shot. “Some mornings were harder than others to get out of bed, so I knew I had to do something, but I wasn’t ready for the knife yet,” he says.

The needle is relatively small. “A little bit bigger than something like an immunization shot,” says Richards. “Certainly not something you’re going to cry about.”

After three weeks of no running or taking the steps, Richards is back to normal. “Swimming, biking, a lot of exercises are still part of my routine, which I’m very thankful for,” he says.

Richards other knee is starting to act up, I asked if he would do it again. “Oh absolutely,” he says. “Probably will soon.” 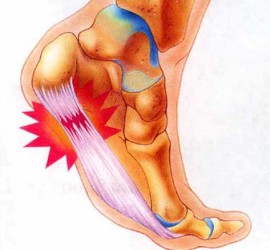 Platelet Rich Plasma PRP Therapy in Sarasota Florida for Joint and Foot Pain Patients are being treated currently at Sarasota Neurology with PRP (platelet rich plasma) for a wide variety of joint pain and other pain issues. Among the more common uses for PRP are knee pain, shoulder pain and […]

Foot pain is common in the United States. Approximately 1 out of 5 Americans suffer from foot pain. Frequently they are found to have heel spurs which cause pain. Associated with heel spurs is plantar fasciitis. Plantar fasciitis is an inflammation of the main supporting structure on the bottom of […]

PRP Can Be Used To Treat: